Book Title: Trusting Him (The Retreat #2)

It is a standalone story within The Retreat series. 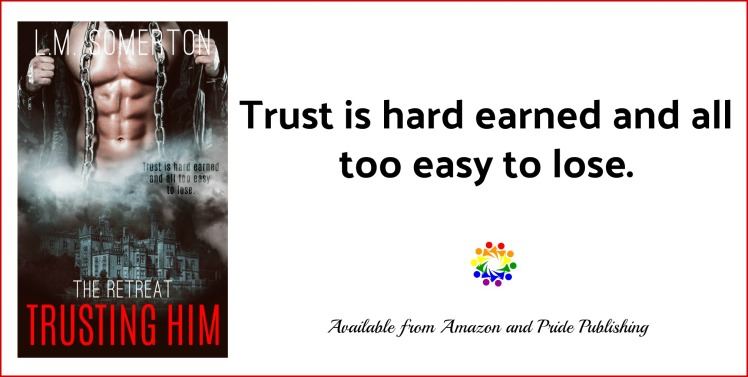 Luke Redding’s military background is an asset when it comes to managing The Retreat, but it hasn’t helped him find the submissive he longs for. A secluded life in the New Forest, witnessing a stream of happy couples playing out their fantasies, doesn’t provide much opportunity to develop a relationship either. When a friend’s manipulations lead to him taking on silver-haired Skye as a trainee sub, Luke finds it hard to trust in his own ability to provide the guidance Skye needs.

Skye Ingham wants to explore his submissive nature but the noise and crowds at The Underground are overwhelming. He can’t believe his luck to be taken under Luke’s wing and offered a job at The Retreat. As Luke tests his boundaries, Skye trusts him implicitly, but how can he convince his new Dominant to have faith in himself?

Amid the bustle and excitement of a big house party at The Retreat, Luke and Skye edge their way towards a deeper understanding of each other’s needs and desires. But it will take a final leap of faith to secure their future and open a path to love.

It wasn’t dignified, but Luke twisted around in his seat to take a look at his potential employee as he wound his way between the tables. He hadn’t formed an impression of what Skye might look like, but the reality was better than anything Luke’s imagination could have conjured. Skye was slight, delicate, maybe five feet six or seven, no more. His skin was lightly tan, a coloring that Luke guessed came from his heritage rather than the sun. He had no tattoos that Luke could see and considering that all he wore was a short leather kilt, that didn’t leave much room to hide any. The wavy hair Luke had assumed was pale blond was in fact silver-gray, though the boy’s eyelashes and brows were a much darker shade, which made Luke wonder if the silver was natural.

Skye stopped in front of the table facing Luke and Carey. He clasped his hands behind his back and ducked his head. “Gordy said you wanted to see me, Mr. Hoffman.” Skye’s voice was so soft Luke had to concentrate to catch his words.

“I did, Skye. You remember I spoke to you about a job at The Retreat in Hampshire?”

Nodding, Skye darted a quick look at Luke. Luke caught a glimpse of violet-blue eyes before Skye focused his gaze on the carpet once more.

“Well, this is Mr. Redding. He’s in charge of The Retreat. I want you to wait on us over lunchtime and show him what you can do.”

“Hello, Skye,” Luke said, keeping his voice low and trying to project reassurance. “I hear you’ve had excellent training. We have a mixture of guests staying at The Retreat, but they all have something in common. They love their food. We have a dedicated chef and customers can pick their own menus and eat as much as they want. That means a lot of serving both at table and in the guests’ rooms. Do you think you can handle that?”

Skye scuffed his bare toes into the carpet. “Yes, Sir.”

Luke tightened his grip on his drink. He expected Skye to bolt but instead he undid the buckle at his hip, let the leather garment drop to the floor then stepped out of it.

“Hands behind your back,” Carey instructed.

Luke glanced around the restaurant. Almost every man in the place had turned to watch. Skye stood absolutely still, clad only in the mesh thong that was issued to all the serving staff at The Underground to wear under their kilts.

Luke watched, entranced, as Skye walked away, hips swaying. He might as well have been naked for all the coverage his underwear gave him. He had natural grace and if it weren’t for the slight tension in his shoulders, Luke might have believed he was entirely comfortable following Carey’s orders.

“You’re testing him. Why?” Luke didn’t take his eyes away from Skye as he collected two menus and returned to the table.

“Because you need to be confident that he will do as you ask, when he’d prefer to run and hide.”

“He’s attracting a lot of attention.”

Carey’s smile turned into a smirk. “Then you can handle him from now on.”

LM lives in a small village in the English countryside, surrounded by rolling hills, cows and sheep. She started writing to fill time between jobs and is now firmly and unashamedly addicted. 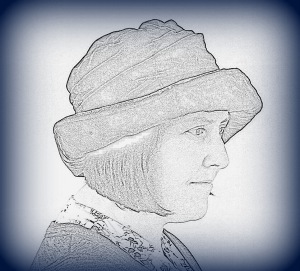 You can track her down online here: